"It was 10 years ago today". Well, that little re-writing of "Sgt Pepper's Lonely Hearts Club Band" by The Beatles could actually fit this website. It feels like it was yesterday when I sat down to create the Kes Photo Gallery which later developed into the Kes Website.

From a rather small site with some images which were picked up from different sites on the net and some angry notes about why Kes had recently been kicked out from the ongoing Star Trek Voyager, the site has developed into something much bigger. It's not only a photo gallery but a website with so much more, stories, games, timelines, crew manifests, maps and much more. It's like this little project has developed into something with it's own life. And it has been fun all along!

OK, the actions to bring back Kes to Voyager which this site supported  did fail. But Kes isn't gone. Instead we have other stories and a continuation of the adventures for Our Favorite. The site has also succeded in keeping the interest for Kes alive.

Of course there are a lot of people to give credit to. Sai Wong, who created the excellent Kes Internet Support Society, the site which gave me the inspiration to come up with something similar, but still different. The original "Lynx crew" (no, not the characters in the fanfic stories but some real people I know) who did come up with advices, suggestions, sharing of their HTML knowledge and much more and of course Jennifer Lien whose brilliant portrayal of Our Favorite Ocampa made the character to the fascinating character she is and most of all Kes herself, a wonderful character in the wonderful Star Trek universe.

And OK, let's give some credit to Rick Berman, Brannon Braga and Jeri Taylor too. This site hasn't always been nice to them and I still disagree with some of their decisions but we do owe them for creating this fantastic character in the first place.

And let us not forget the Kes fans all over the world who continues to visit this site. You're great, keep up the interest for Our Favorite! 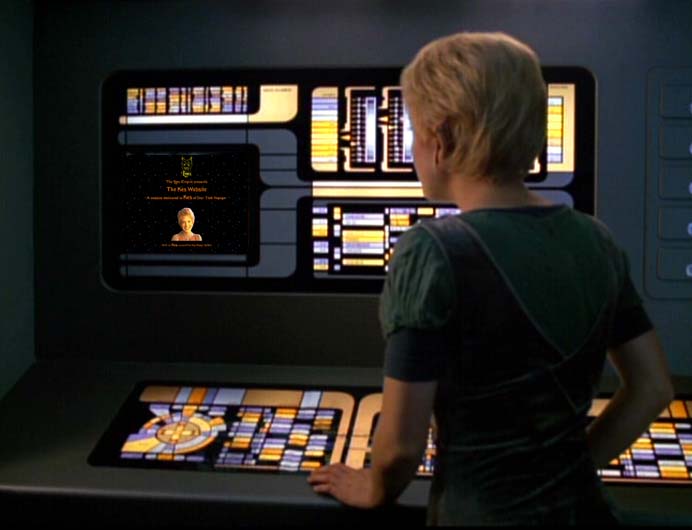 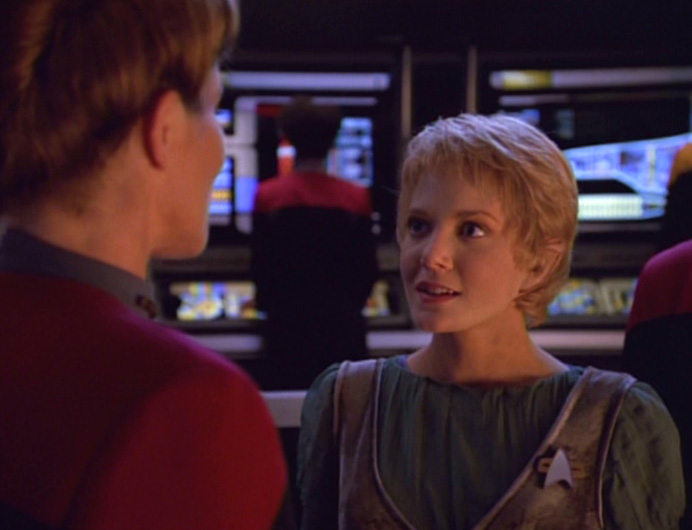 Kes: "Captain, I just realized that it's the TENTH anniversary of the Kes Website! Isn't it wonderful?"

How the celebrations took place

The 10th year anniversary of the Kes Website took place on the evening of 9th June on the USS Voyager where our favorites plus special invited guests were gathered to celebrate the website.

And it must have been a real party because the server went down twice during that day! The Voyagers did obviously give the staff at 110MB a busy day!

Not to mention that the site did have its 74 000 visitor during the evening too!

The program for the evening of the 9th June started at the Holodec with a Hoverball game between Chakotay and B'Elanna Torres. It was a very exciting game which Chakotay finally won, using his usual tactics to make B'Elanna "tense up"and lose concentration. Stlii, it was a very even contest which B'Elanna could have won as well.

On the menu we had:

(watch out for Neelix, Tom!)

(THE delicacy of the Delta Quadrant)

not to mention Kes's favorite

And we had some special drinks as well:

Spinach juice with a touch of pear

Most of the entertainment was organized by Tom Paris who did entertain all guests with his collection of Earth 1950's and 1950's rock music. But there were some other entertainment as well. It included:

A piano sonat by Kathryn Janeway. Very well received by the audience.

Neelix told some stories about his traveling in the Delta Quadrant and also sang the Bon Jovi song "Bed Of Roses" with a somewhat altered text :

"For tonite I sleep on a bed on junk, say it again! Junk!" The stories, although somewhat long and winding, was well received by the audience and the song received a standing ovation.

The Doctor did sing his masterpiece "O Soave Fanciulla" and was joined by Seven Of Nine for the songs "My Darling Clementine" and "You Are My Sunshine". Here we had the most entertaining part of the evening with a great variation in musical styles and musical skill from the performers.

Then we had the main ceremony when Neelix entered with the Jibalian Fudge Cake, this time with 10 candles.

Kes  hold a little speech about her appreciation of the website, received a boquet of flowers from the Webmaster  (who had joined the party thanks to Captain Braxton) and then she did blow out the candles. 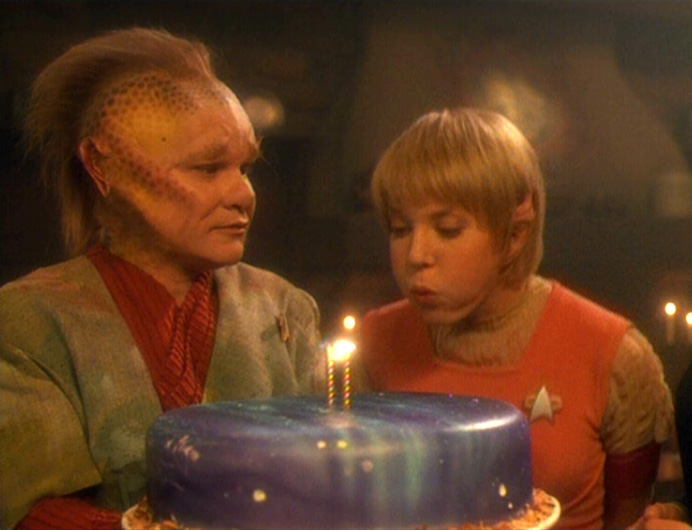 Neelix watches when Kes blow out the candles (hmmm, some candles missing there, maybe they were blown away)

She did also contribute to the musical entertainment with a somewhat unexpected performance, singing the Stevie Nicks-Tom Petty song "Stop Dragging My Heart Around" in a duet with Tom Paris. They were joined in the middle of the song by Neelix which increased the quality of the performance even more and brought back fond memories of the days in the Delta Quadrant. 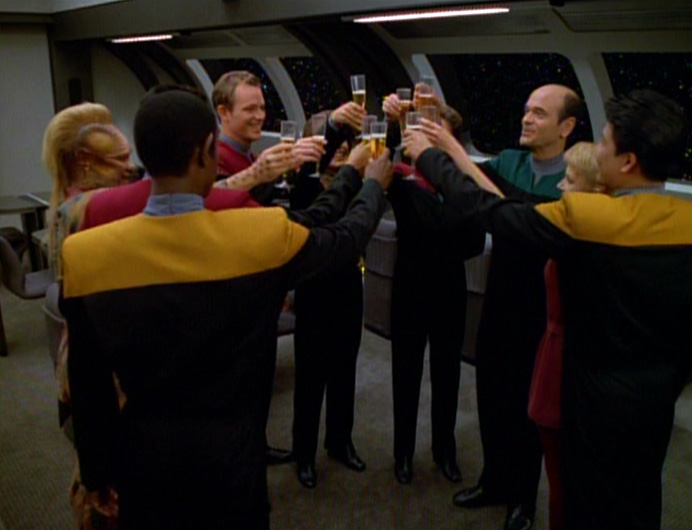 After eating some cake, Kes thanked everyone for coming, making the celebration of the website a wonderful party. Then Kathryn Janeway proposed a toast for the website.

After that,the celebrations continued at Sandrines with the yearly pool tournament. Tom Paris was the favorite for the title and finally won but the competition was a tough one. Tuvok and Janeway did, as expected give Tom a fight for the title but there were was an impressive performance by Neelix who obviously had trained hard for the tournament.