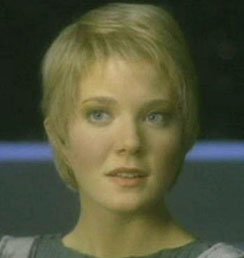 A brief story about our favorite.

Kes was born on the Ocampa homeworld in 2370. Her father’s name was Benaren and her mother’s name was Martis. She also had an uncle named Elrem. The Ocampa people have a lifespan of only nine years. They live in an underground city and their needs was for long provided by the Caretaker. The Caretaker was an alien entity who once caused an ecological disaster on the planet, turning it to a desert. That’s why the Caretaker cared for the Ocampa, helping them to build their underground city and provided their needs, supplying them with the energy they needed from the array in space where the Caretaker lived. 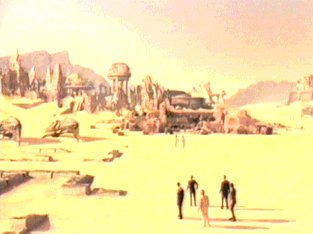 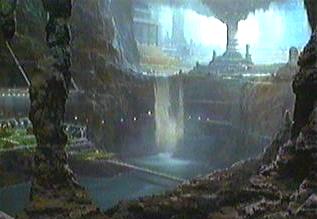 And so it went on for a 1 000 years. But when the Caretaker felt that he was dying he began to supply the Ocampa people with resources for five years. Then the Caretaker died and the array was destroyed by Voyager in an attempt to prevent the Kazon-Ogla from taking over the array. What happened to the Ocampa people when they were out of supplies and energy is unknown.

Before the Caretaker arrived the Ocampa was a powerful people with strong mental abilities. But they had been lost and forgotten during the years of over-protection by the Caretaker. A few Ocampa, like Kes, believed that the Ocampa once had strong mental abilities and she was eager to discover if she could get them back. She was also a born explorer and an adventurer. She found her way up to the surface of the planet. But there she was captured by the Kazon-Ogla, one of the powerful Kazon sects who rules this part of space. Kes was tortured and enslaved by the Kazons, who tried to persuade her to show them the way to the Ocampa underground city. But she refused. A Talaxian merchant, Neelix who was doing some business with the Kazons fell in love with Kes and promised to rescue her. Meanwhile the Starship Voyager had been transported to this part of space by the Caretaker who was desperately seeking for someone who could replace him after he died. Harry Kim from Voyager and B’Elanna Torres from the Maquis ship that Voyager was searching for, had been transported to the Ocampa underground city by the Caretaker and, while searching for them, the Voyager crew meet Neelix and when they later encounter the Kazons, Neelix was given the opportunity to rescue Kes.

After finding their missing crewmates and destroying the array, Voyager was heading for home, 70 000 light years away. Kes persuaded Neelix that the two of them should join the Voyager crew and, as she said, be part of their journey. Voyager’s captain Janeway agreed and both Kes and Neelix became two very important members of the crew. Kes started to grew vegetables and fruit in the Airponics  Bay as food for the crew, and flowers which she loves so much. She also became an important help for the Doctor as a nurse.

Kes continually strove to expand her knowledge and skills. She learned to pilot a Federation shuttlecraft under the tutelage of Tom Paris and she also studied Vulcan mind-control techniques under Tuvok's direction on the theory that this would help her to develop her natural Ocampa abilities. On some occasions, Kes’s mental powers helped to save the ship, for example when the Bothans tried to take control of the ship and when they encountered Suspiria, the caretakers not so friendly mate who tried to destroy Voyager as revenge for the Caretakers death. (Suspiria suspected that the Voyager crew had killed the Caretaker which wasn’t the truth.)

Kes relation with Neelix broke up short after that Tieran of Ilari had tried to take control over her body in an attempt to take over the Ilari government. Kes finally succeeded to get rid of the evil being that had taken control over her body and mind. Despite the break-up Kes and Neelix remained good friends.

During her time on Voyager, Kes was loved and respected by all the Voyager crew because she always tried to be good and kind to everybody. Even in dangerous and difficult situations she tried to see the positive and good in everything.

But then something strange happens. Kes body started to change in a way that put the ship in danger and she was turning into an energy life-form. She left the ship in a shuttle and what happened later to her is unknown.

An alternative Kes come-back story which effectively wipes out the damage to the character made by crap episodes like "The Gift" and "Fury" can be found here.

Scary tales. The real story about why Kes was "deleted" from Voyager.