about Kes and Ocampa 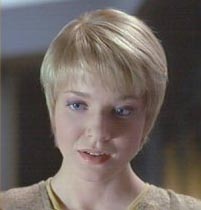 The name of the Ocampa sun is Caeleron. It's a G2-class sun.

(Star Trek role-playing games-Aliens. In this book, Caeleron is labeled as an A4 V-type sun but in the episode "Caretaker" and the book with the same name it's labeled as a G2-class sun so we stick to the official facts here.) 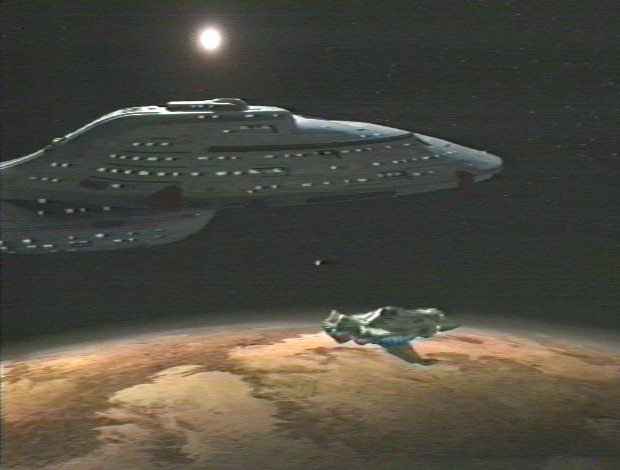 Voyager and the Maquis ship over Ocampa

Ocampa is the fifth of six planets. Many of the planets in the system holds rich metal deposits, attracting the likes of the Kazon-Ogla. The forur planets between Ocampa and the sun are all small, rocky planets orbiting to close to the sun to produce life. 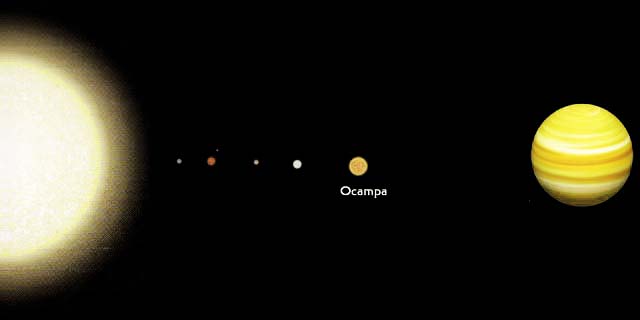 When the Caretaker died, the Ocampa only had enough energy reserves to maintain their subterranean city for a few years and the Ocampa debated what to do. Some chose to venture above ground, searching their long-lost scientific records for a means to restore the surface of the planet to habitability. Others chosed to remain underground and sought ways to provide their city. Still others, bolstered by Voyager's example and inquisitive about the rest of the Galaxy, sought to construct their own starship in hopes of finding a new world for the Ocampa to colonize.

At an early age, Kes became curious over the ancient history of her people and the long lost mental abilities of the Ocampa. She got in a conflict with the Ocampa elder Toscat over that and once staged a demonstration in the middle of the Assembly where she and the other demonstrators demanded access to the archives with the written history of the Ocampa.

Kes cut of her long hair after a debate with Toscat. The Ocampa Elder had touched her hair which she found annoying and decided to do a radical change of her hairstyle. She also did it because she wanted to be different.

An alternative Kes come-back story which effectively wipes out the damage to the character made by crap episodes like "The Gift" and "Fury" can be found here.

Scary tales. The real story about why Kes was "deleted" from Voyager.